1. Russia is bigger than Pluto

2. The True Size of Africa

Africa is much bigger than what it looks like on most maps of the world. To put it into perspective, we can fit all of the following 18 countries into Africa and still have room for more:

The combined area of these counties is 30.1 million sq. km which is still slightly less than that of Africa. [See map]

There’s a town called Okay, OK. It has a population of about 650. (Tweet this fact!) 4. Only 2 percent of the Australian population lives in the yellow area

The total area of Australia is almost equal to that of United States minus Alaska, however, its (Australia’s) population is just 23 million which is less than the population of Texas alone. 5. Since its discovery, Pluto never made a full orbit around the Sun Pluto takes 248 years to complete its orbit around the sun that our earth completes is just one year.

6. The Diomede Islands are 2.4 miles and One Day apart You are seeing the map right! Russia and Alaska are indeed this close apart. This is the part where we cut the world map to present it in a planer form instead of a globe.

7. You can actually fly on Saturn’s moon Titan

The gravity is low enough and the atmosphere thick enough on Titan, that by attaching small wings to your arms, you could fly like a bird. The gravitational pull there is seven times less and the escape velocity is four times less than that of the earth. 8. If an alien located 60-65 million light years away from us, looked at earth through a really powerful telescope today, he would see Dinosaurs! 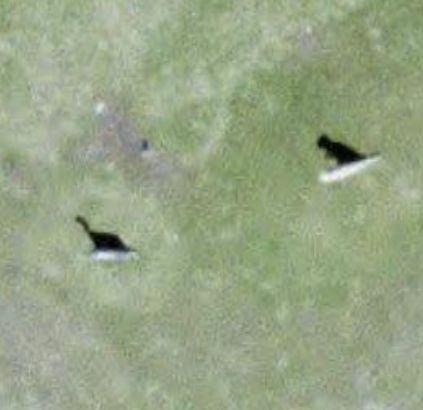 This makes sense since we, at earth, are only able to see the objects in the outer space who’s light has reached us. The Dinosaurs lived on this planet about 60-65 million years ago and their light/visibility has only reached the location 60-65 million light years (or 382,102 trillion miles) away yet. [via quora]

9. The World’s population can fit comfortably in Texas

The world with a population of 7 billion can fit easily in Texas –Tweet this– (water included in area) with each person having a 1000 sq. foot property of his own. Of course, there’ll be no space for roads, parks and other infrastructure whatsoever. [image courtesy: aliveandyoung] Unlike earth, the planet Mercury rotates very slow about its own axis taking almost 59 of our days to complete one rotation. That’s one day by Mercury’s definition, however, one solar day (sunrise to sunrise) on Mercury, which depends on both its rotation and orbital motion around the sun, is 176 Earth days.